It has been hard to fit in the time for writing this past week. Since Monday, we have been steadily making our way across the width of Sweden. We arrived in Stockholm in the early afternoon on Friday, after spending the morning battling gale force winds and light rain, trying to find our way into the city.

In my last post I wrote about our time in Bergen and the Hanseatic League, but I wanted to take a minute to describe a bit our time in Oslo.

We arrived in Oslo on Tuesday, June 20 on the overnight ferry from Frederikshavn, Denmark. The boat was an enormous car ferry, filled largely with trucks and their drivers. For an overnight passage, everyone is required to book a cabin, so B and I had booked a 4 berth cabin (the smallest available) in the interior of the ship, unfortunately, as that was all that remained when we made the last minute reservation. The ship had quite a number of bars and restaurants and a large duty free shop.


Similar to the boat I took from Rostock, Germany to Gedser, Denmark, this ship specializes a bit in providing duty free goods to travelers. The shop looked like the ground floor of Macy’s (well, not that big), or very similar to a duty free shop in a major airport, except of course there were metal bars across all of the shelves so that items didn’t fall off in case of poor weather. We generously sampled the Clinique and Estée Lauder products, moisturizing our dry and sunburned skin. We have learned that the duty free sections are so large on these boats, due to the very high taxes on items in Scandinavia, especially on alcohol. It is very typical for people to ride the ferries round trip just to be able to drink.
We had brought our own food on board, and had a picnic in the corner of the dining room, only being told at the end, when we’d finished everything, that we weren’t allowed to bring in outside food. B used up some of her Danish Kroners on a large Toblerone bar. The sea was a bit rough and despite the boat’s massive size, it was starting to rock a bit, so we headed to bed. Unfortunately we didn’t go check out the Havana Disco Club on the 9th floor.
The next two days we spent in Oslo were enjoyable and sun-filled. We stayed with a Norwegian friend and her boyfriend. Her boyfriend is a doctor, which ended up being very practical, considering the pain B was still experiencing with her knee. Our host managed to help B figure out the best pain/anti-inflammatory medications to be on for our ride from Oslo to Stockholm the following week. Their apartment is located in Grünerløkka, a hip neighborhood. Our host, A, had helpfully prepared us an information sheet with Oslo’s main attractions, public transportation information, and good places to eat.
B and I began our time in Oslo with a trip to the Munch Museum. Much is perhaps Norway’s most famous artist and the museum in Oslo is the largest museum in the world dedicated to one artist. They are in possession of more than 27,000 works, though unfortunately they have limited space, so can only show one exhibition at a time. The museum’s current exhibition was curated by Karl Ove Knausgård. The paintings exhibited were gorgeous and centered around nature. 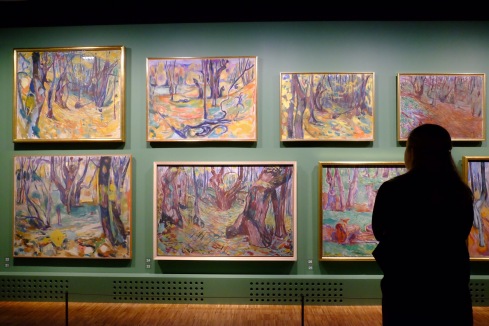 Following the Munch Museum, B and I walked across Oslo. We stopped for samosas in the Pakistani neighborhood, and continued into the center of town.
Oslo is a small city. It has about 660,000 inhabitants, with a population of around 1.7 million in the metropolitan area. Norway has only 5 million inhabitants. B and I ended our walk at the royal palace. As A and her boyfriend explained to us, the royal family of Norway don’t have the same bloodlines as the original Norwegian royals from centuries ago, as the country was controlled by Denmark and later Sweden for several centuries. Norway established its own constitution in 1814, though it wasn’t officially independent until nearly 100 years later. The Norwegian throne was offered to a Dano-German prince. He accepted and was voted in by Parliament. Born Carl, he took the Norwegian name Haakon VII.
Norway is a very safe country, and there was shockingly lax security around the palace. We were able to walk right up to it and B and I sat in the back gardens for a while, enjoying the sun. We also watched a very traditional changing of the guards. Our friends confirmed that the guards are largely symbolic, though it is still a big honor to become a palace guard.


On our second day in Oslo, we took a bus to the Bygdøy Peninsula where many of Oslo’s museums are located. We visited the Museum of Cultural Heritage (of the Dano-German royal house of Schleswig-Holstein-Sonderburg-Glücksburg). It is reminiscent of Plymouth Plantation, with authentic buildings and reenactors, except the museum grounds comprise buildings from many different eras of Norway’s history. There is also a large exhibit on Sami culture.  We saw a church from the Middle Ages, homes from the 12th, 17th, 19th, and 20th centuries, and three different farms. There is even an entire tenement building, constructed in the 1860s and relocated from Oslo. An exhibit takes you through the lives of every inhabitant of the tenement, with information about each one’s trade and relationships. The museum was extremely well done. There are 150 buildings at the museum, which was established in the 1890s. The museum can receive up to 20,000 visitors on a summer weekend.
That evening we were treated to a Norwegian barbecue with our hosts and their friend. We had mushroom and fish burgers on a small grill in their back courtyard. We sat on the floor of their balcony for a delicious meal. Supposedly Norwegians love to barbecue in the summer, but the typical method is to buy a small grill at the grocery store that is used for one barbecue. They look like foil serving dishes. We saw several people in Denmark using one in a park.

We made a quick stop at the Norway Jewish Museum, where our host works. It is small, but the exhibits are extremely well done. They educate many Norwegian schoolchildren. About 1100 Jews were deported from Norway during the Holocaust.


Following two days in Norway, we headed west to Bergen, about which I’ve already written. In addition to learning about the Hanseatic League, B and I hiked and took a train to Voss, to see some fjords.
Bergen is the rainiest city in Europe. Somehow we were not aware of this when we booked our plane tickets, but we took it in stride, despite the fact that the city has had the wettest June in more than 65 years. We had been planning to go on a fjord tour, but with the rain and dense, low-hanging clouds, it would have been impossible to see anything. When the sun came out on Saturday, we spontaneously took the train to Voss, excitedly looking at the fjord we were following. We spent an hour and a half walking around Voss – there was still snow on some of the mountaintops – and sitting by the lake before taking the train back to Bergen. This was the furthest north we had been and the sky was still light when we went to bed around 12:30. It never really gets fully dark at night.

Bergen is a huge tourist destination and cruise ships come in and out all day long. We stayed at an AirBnB. Our hosts were a Mexican and Italian couple. She is a tour guide and rotates through English, Italian, Spanish, Slovenian, and German all day long as she gives tours. Many of the seasonal employees in the tourist industry in Bergen are international. People come from all over the EU and beyond to work in Bergen for the summer. The touristy outdoor fish market is staffed by people from Germany, Israel, and Japan, to name just a few countries. Along with fish there was whale meat for sale at nearly every stall.
Back in Oslo on Sunday afternoon, we adjusted B’s bike fit to further accommodate her knee and we reorganized our bags. Sunday, June 25 was also Eid. We went to dinner in the Pakistani neighborhood. There was a festive atmosphere and many people we passed were dressed up for the holiday.

Oslo has two different bicycle themed cafes and we managed to go to both of them – Peloton and Oslovelo. The biking scene appeared to be more dedicated bicycle enthusiasts, and fewer people for whom biking is a thoughtless/obvious activity, because it’s so normalized, which we noticed in Amsterdam.


The rain in Bergen included, our time in Norway was really enjoyable. Despite being exceedingly expensive, it was a fun country to visit. I’m only sorry we couldn’t spend more time in the fjords. I’d love to come back in the winter at some point to Nordic ski.